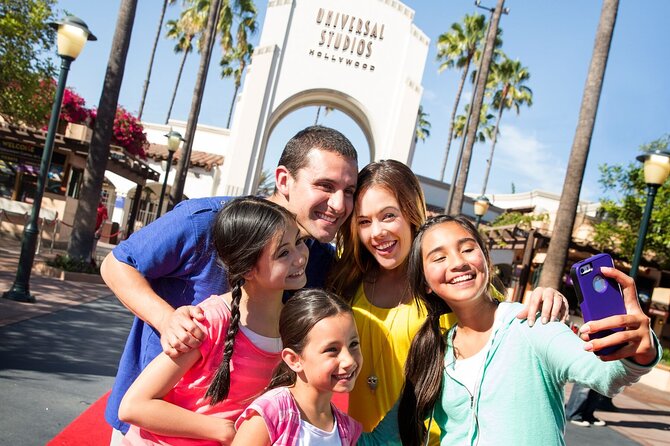 23.How to Get Around

Get ready for the ultimate Hollywood movie experience! Don't miss the chance to visit the world's largest movie studio and theme park! At Universal Studios Hollywood there's a world of fun-filled adventures the whole family will love.

Explore the mysteries of Hogwarts™ castle, visit the shops of Hogsmeade™, and sample fare from some of the wizarding world’s best-known establishments. Plus, experience Harry Potter and the Forbidden Journey™ and Flight of the Hippogriff™ as you are transported into a world of magical thrills and excitement.

Visit 13 city blocks on four acres of historic studio lot in the largest set construction project in studio history! You’ll laugh along with comedian Jimmy Fallon, the video host of the Studio Tour as he introduces entertaining clips seen on HD monitors in the trams to augment the live Studio Tour guide narration. Encounter the smoldering wreckage of the Boeing 747 from Steven Spielberg's War of the Worlds; Come face-to-face with Amity Island's most famous resident – "Jaws"; see the world's largest, most intense 3-D experience - King Kong 360 3-D, see the incredibly creepy Bates Motel and hold on tight for the grand finale of the Studio Tour, Fast & Furious – Supercharged!

Discover the exciting world of your favorite Pets characters on the all-new ride, The Secret Life of Pets: Off the Leash, now open. Join Max, Duke, Gidget and Snowball on a journey through the streets of New York City and celebrate at your very own welcome-home party.

Prepare yourself for an epic world of adventure in Jurassic World. Enter into an immersive land where you’ll experience the all-new heart-pounding Jurassic World –The Ride. Then, come face-to-face with Blue at the Raptor Encounter, excavate fossils at DinoPlay, grab a bite at Jurassic Café, a cocktail at Isla Nu-bar, and shop at Jurassic Outfitters

Face heart-pounding special effects and shocks at every turn, plus raging mummy warriors, on a rollercoaster ride into the world of The Mummy

Enter through the towering castle gates and make your way down the familiar passageways and corridors of Hogwarts™ School of Witchcraft and Wizardry. Visit iconic locations such as Dumbledore's office, the Defence Against the Dark Arts classroom, the Gryffindor™ common room, the Room of Requirement, and more. Then get ready to soar above the castle grounds as you join Harry Potter™ and his friends on an unforgettably thrilling adventure, coming face-to-face with an array of magical creatures. This amazing attraction uses groundbreaking, state-of-the-art technology (and a little magic) to create a one-of-a-kind ride.

Join Gru, his daughters and the mischievous Minions on a heartwarming and thrilling ride. Start your journey in Gru’shome, where you’re recruited for his latest scheme –one where you’ll become an actual Minion. Then, visit a re-creation of Illumination’s Despicable Me’s memorable seaside carnival, Super Silly Fun Land, an all-new, over-the-top outdoor family play zone

The Simpsons Ride™ and Springfield, U.S.A. Careen and crash through Springfield U.S.A. with America’s favorite animated family, The Simpsons™. Enjoy the town by visiting the famous KrustyBurger, indulging in delicious Lard Lad Donuts and meeting friends at Moe’s Tavern!

Super Silly Fun Land is an elaborate play zone adjacent to Despicable Me Minion Mayhem. This colorfully themed, interactive Minion-inspired outdoor venue is a literal interpretation of the seaside carnival from Illumination’s “Despicable Me,” designed to entertain guests of all ages with its more than 80 different water-play features. A nearby dry zone invites guests to climb, jump and slide, while the Minion-themed ride, “Silly Swirly Fun Ride,” will soar and spin guests around for a 360-degree view of “Super Silly Fun Land” aboard a fleet of uniquely styled ride vehicles.

Don’t miss the award-winning King Kong 360-3D created by Peter Jackson – The world’s largest 3-D experience, only on the Universal Studios Hollywood™ Studio Tour. Your heart will pound. Your survival instincts will be on overload. Prepare to be caught in the middle of a terrifying struggle between a 35-foot T-Rex and the 8th wonder of the world – King Kong.

Flight of the Hippogriff™ is a family-friendly roller coaster that spirals and dives around the pumpkin patch, and then swoops past Hagrid’s hut.

Ride along with the all-star cast from the hit movies on an exhilarating high-speed chase that exceeds 120 miles per hour and catapults you into the high-stakes underworld of fast cars and international crime cartels. You’ll be engulfed in a world of cutting-edge, hyper-realistic special effects, including 3D-HD imagery projected onto the world’s most expansive 360-degree screens! Fast & Furious - Supercharged is featured on The World-Famous Studio Tour.

Get ready for another level of awesomeness at DreamWorks Theatre Featuring Kung Fu Panda. Join Master Po in a multi-sensory attraction using state-of-the-art visual effects and cutting-edge technology to engulf you in a world of adventure

See your favorite scenes from The Secret Life of Pets re-enacted, and watch exclusive film content at the Universal’s Animal Actors show! Witness Tinseltown-trained critters putting pet tricks to shame with their animal antics! The animals aren’t just in the live show, they’re in control! Who knows, you might even get to co-star!

Get an exclusive behind-the scenes look into your favorite blockbuster movies in our Special Effects Show as stunts, practical effects and cutting-edge technology come to life. 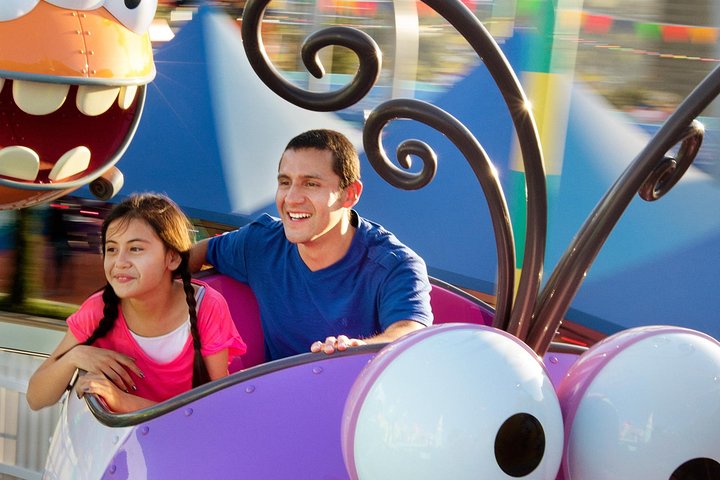 Confirmation will be received within 48 hours of booking, subject to availability

Please Note: In order to maintain the safety of guests, modified operating procedures have been put in place. Guests visiting the park will have their bags inspected by staff. Large bags and coolers will not be permitted in the park. Outside food is not permitted inside the park with the exception of bottle water, fruit and baby food.

IMPORTANT: Voucher is only valid for selected date of travel

** 2nd Day Free Offer ** - You must purchase the 'Buy a Day, Get A Day' option to get this ticket offer. Valid for sale through November 3, 2022 and valid for travel through December 15, 2022. Unused days after this date will be forfeited. Blockout dates apply to second visit. See option for dates. First visit valid on selected date only. Ticket is non-transferrable, non-refundable and non-exchangeable. Ticket may not be copied, altered, transferred or resold and is valid only for the person named on it. Ticket cannot be combined with any other offer, event, Halloween Horror Nights or sightseeing tours.

Most travelers can participate

It is recommended that all guests wear masks indoors

Posted By : iris a
It was a family trip. Two teens and three adults. We had a fantastic time. Of course it was a lot cooler than we'd expected (we didn't anticipate this kind of weather in sunny CA) the next time we come it will definitely be in the summer!
Rating :

Posted By : Rowena_B
Wonderful family time for holidays and creating memories ! Thanks for this great and easy ticket purchase
Rating :

Posted By : Mythily M
Had so much fun plus booking with Tripadvisor sometimes means you can use a coupon code. I also had an extra day free. The park doesn’t have many rides it won’t take long to go on all of them but I recommend weekdays when there are usually less people.
Rating :

Posted By : Debra R
There is really quite a lot on offer here and we enjoyed our visit. There are rides, shopping, characters, restaurants, shows and more. I personally enjoyed the tour and the stunt show the most. We opted for a one day pass which was enough for our family.
Rating :

Posted By : leegA5217GQ
You pay a small fortune as per any amusement park but if your a smoker prepare to be discriminated against. You will get a ticket but once you leave the park you can't re-enter and their is no designated smoking areas inside the park. It's all good if the discrimination goes the other way with cultures, ethnicity or sexualality but it's the same discrination against all smokers.
Rating :

Posted By : NickP397
We been to Orlando Universal studios and IOA many many times and our daughter had been here before and said it wasn’t as big with as much here as Orlando, however we thought the City walk was better, and the Universal Studios tour was brilliant, we arrived quite early and entered the park 15 minutes before official opening park time, don’t get caught out upgrading to VIP which is hard sell at the gate, or the Express pass, check out online the expected park capacity plan for A quiet day, midweek is best earlier the better, there’s hardly any queues and if you can’t and you enter the park and it is busy then you can buy the express after, but it’s a big gamble if if you’ve paid enter and it’s quiet!! Anyway the park is split over two levels, it doesn’t have an Islands of adventure, no ET and a smaller Harry Potter land , it’s good and a few differences to Orlando but the studios tour is a must do, a real experience worth doing in its self.
Rating :

Posted By : frank1e
This park is not a patch on the florida one would advise you not to make a point of going to it unless you are visiting california has a lot fewer rides and very expensive for food and drink.
Rating :

Posted By : marisusami
It was OK. First thing in the morning there were no lines. As the day went on they were horrible. We waited 1 1/2 hours for the "secret life of pets " ride. Pathetic when it said 30 mins.
Rating :

Posted By : roseyd99
We absolutely loved our day here! We arrived at about 10.30/45 and there was a small que to get in but the lines for rides etc were remarkably small!! This was a Tuesday. Staff were good. Food was more expensive than the corner shop but we didn't think they were astronomical for inside a park
Rating :